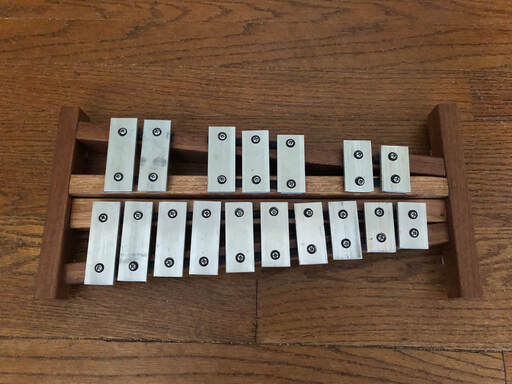 The Piccolo Glockenspiel is a project by Connor that sought to increase the number of high pitches available on the glockenspiel. Connor became interested in higher-pitch territory while working on the Expanded Toy Piano project. Most glockenspiels extend to a highest key between C8 and E8, sometimes to F8 or G8. Similarly to toy piano modification, Connor found that glockenspiels were a worthy candidate of exploring the highest octaves of musical perception.

The term Piccolo Glockenspiel is not trademarked or widespread; it is instead a simple expression to reference the very high-pitched nature of the instrument created, with a range of C8-E9. This instrument was intended to serve as an experiment and explore the extremes of musical register. Several technical difficulties came about regarding tuning and physical construction. This has resulted in a quirky instrument which speaks best when bowed. It is difficult to make the D9-E9 bars speak, but they are available and show the limitations of instrument creation in this register.

The intent to create this instrument began in July 2018, beginning with the drilling of the small, steel keys. Due to other ideas and projects, as well as teaching and other commitments, the instrument was not completed until the end of August 2020. Earlier in the process, Connor considered abandoning the physical instrument idea with careful consideration of playing harmonics on existing glockenspiels. On Connor’s own Olds glockenspiel (with aluminum keys) he was able to find harmonic pitches consistently up to D9. This process was decided to be more laborious than desired, reviving the interest in a new instrument.

In order to create the Piccolo Glockenspiel frame, Connor (with the help of colleagues) repurposed the Olds glockenspiel. The remaining parts of that instrument were used to create a lower-range extension of C5-E5. The original G5-B5 bars were taken and drilled out to lower their fundamental pitches. Due to the resulting nature of these modified bars, the overtones are increasingly audible and the fundamental is more clearly heard when the bars are bowed.